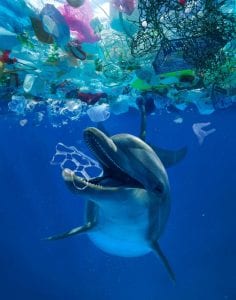 Oceans cover more than two-thirds of the earth’s surface and contain 97 percent of the planet’s water. Marine debris, including plastics, paper, wood, metal and other manufactured materials is found on beaches worldwide and at all depths of the ocean. About 60%-80% of all marine debris is composed of plastic. Worldwide, hundreds of marine species have been negatively impacted by marine debris, which can harm or kill an animal when it is ingested, or they become entangled and can threaten the habitats they depend on. Marine debris can also interfere with navigation safety and potentially pose a threat to human health.

A 2014 study estimated that 8 million metric tons of plastic trash enter the sea from land every year, the equivalent of five plastic bags filled with trash for every foot of coastline around the world. Animals frequently become entangled in large pieces of debris, and can be cut, drowned, or slowed down by dragging the extra weight. Additionally, heavy gear, such as fishing nets, can damage reefs and other important habitats. Because of its durability, low cost, and our increased use in recent decades, plastic makes up the majority of marine debris seen on shorelines and floating in oceans worldwide. This creates a difficult problem because most plastics are not biodegradable (bacteria don’t break them down into simple, harmless components the way they do paper or wood). Instead, as plastic ages, the sun’s light and heat break it into smaller and smaller pieces creating microplastics. This tiny plastic confetti, along with larger pieces of floating plastic, creates a big problem. Birds and filter feeders that strain food out of the water may mistake plastic for plankton, fish eggs, or other food.

SweetNes Honey Apiaries & Beetique, cares not only for our buzzing honeybees and other pollinators, but for all of Mother Earths inhabitants! As beekeepers, parents and environmental activist, our goal is to improve our efforts and protect nature for future generations to come. We encourage you to REDUCE, REUSE, RECYCLE.  Reduce the amount of waste you produce. Reuse items as much as you can before replacing them. Recycle items whenever possible.

We offer ALL of our honey in glass jars. We understand the convenience of the squeezable, shatter-proof plastic bottles. We have kids, we get it! Shattered glass and sticky honey are terrible all over your floor! (yes, we’ve had this happen too!)

Just remember to REDUCE, REUSE, RECYCLE as often as you can!

Click on the link below to learn some FUN ways that you can REUSE our plastic bottles.  Can always call us toll free on our Honey Hotline at 1-877-SWTNES1

$7.99 Flat Rate Shipping for all orders in Texas and only $9.99 for the rest of our great country!